How often should you have a mammogram?

A mammogram is an important annual screening because early detection of breast cancer is key. If you're 40 or over, the American Cancer Society recommends scheduling one every year.

A physician's order is required.

Digital mammography may provide a number of benefits including:

Concerned about breast cancer?
Read more to determine your risk.

Throughout the year and especially during October, which is National Breast Cancer Awareness Month, our hospital wants to make sure women know how important it is to have regular mammograms or x-rays of the breasts.

Doctors know that screenings for breast cancer save thousands of lives each year, and that many more lives could be saved if even more women took advantage of these tests.

While progress has been made across the board, including less invasive surgeries, genetic testing and more advanced diagnostic technology, an estimated 40,000 women are expected to die from breast cancer this year.

That means breast cancer is still one of the top killers of women in the United States, more than accidents, pneumonia or the flu. Breast cancer is the most common cancer among women in the U.S., other than skin cancer. It is the second leading cause of cancer death in women, after lung cancer.

That's the bad news. But there's good news as well. Right now there are about two and a half million breast cancer survivors in the United States.

Breast cancer death rates are going down. This is the result of more women having mammograms which can find the cancer during its earliest, most curable stages, as well as advances in treatment.

How to Decrease Risk of Breast Cancer 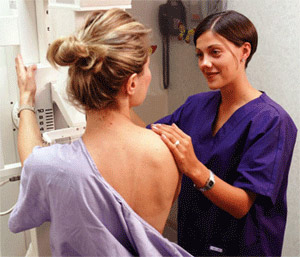 Unlike colorectal cancer, which can be prevented via the removal of polyps during a colonoscopy, there is no sure way to prevent breast cancer. But there are steps women can take that might reduce their risk of breast cancer, or at least help them find it in its earliest, most curable stages.

Women who breast-feed their children for several months or do not use post-menopausal hormone therapy (PHT) may also reduce their breast cancer risk.

Most doctors feel that early detection tests for breast cancer save thousands of lives each year, and that many more lives could be saved if even more women and their health care providers took advantage of these tests.

How Is Breast Cancer Diagnosed?

Doctors often use additional tests to find or diagnose breast cancer. They may refer women to a breast specialist or a surgeon. This does not mean that she has cancer or that she needs surgery. These doctors are experts in diagnosing breast problems. Read more information about post mammography.